The 6 Best Ski Resorts in Wisconsin 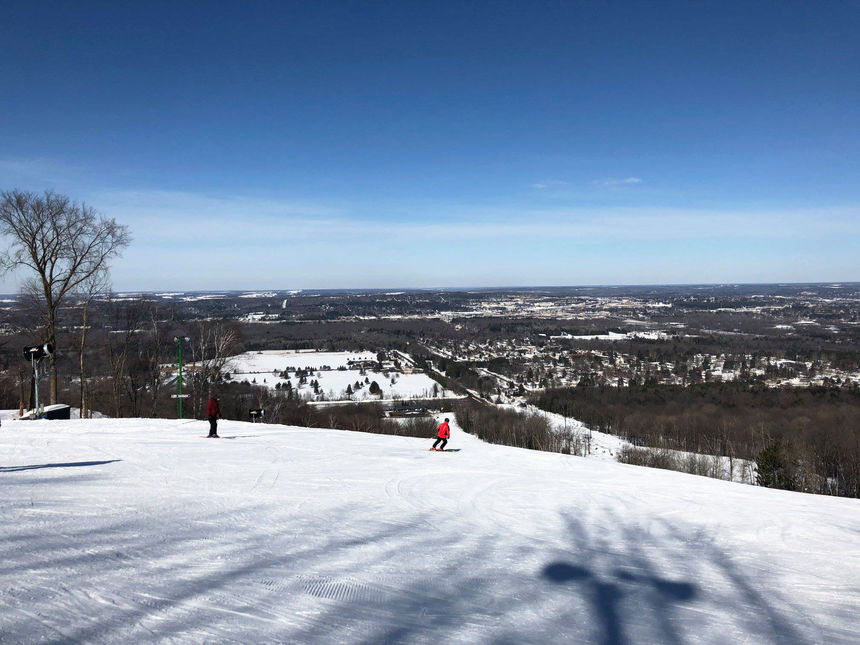 Known as “America’s Dairyland,” Wisconsin also has a reputation as a place with cold snowy winters. For many locals, that means snowmobiling, cross-country skiing, or getting out on the ice. But there’s plenty of downhill action to be had too, with more than 30 ski and snowboard resorts. Here are six of our favorites!

Due to COVID-19, safety measures were put in place by the State of Wisconsin which impacted the 20/21 ski season. These included discouraging nonessential travel and recommending face coverings to be worn in public indoor places. In Marathon County which is home to Granite Peak, physical distancing was recommended and crowds and gatherings were discouraged. Such restrictions are not anticipated to continue into the 21/22 winter season.

Bigger isn’t always better, but Granite Peak’s 700 ft vertical drop and 400 ac of terrain makes it Wisconsin’s biggest and tallest ski resort! The elevation and north-facing slopes generally mean lots of natural snow, plus there’s extensive snowmaking. Recent years have seen considerable investment and made it one of the Midwest’s largest-ever ski resorts. One of the region’s best lift networks serves 75 trails that are suitable for everyone: a dedicated beginners’ area and plenty of intermediate groomers as well as terrain parks, moguls, and glades. Three hours from Milwaukee and an hour and a half from Green Bay, it can be visited as a day trip, or you can stay in nearby Wausau.

Nestled close to Wisconsin Dells, a popular year-round tourist destination with something for everyone, Cascade Mountain is conveniently located in the center of the state and is even easy to get to from Chicago or the Twin Cities. Although its vertical is only 450 ft, it still manages to offer runs as long as 1 mi, a good selection of terrain on nearly 50 runs and four terrain parks. Kids 12 and under ski free which, along with the tubing park, make it a great choice for families. Wisconsin Dells offers plenty of off-slope activities including live entertainment and events throughout the winter.

In the Baraboo Hills with panoramic views of the Wisconsin River, Devil’s Head offers 30 trails and 500 ft of vertical. There are runs for all ability levels, mostly grouped together on separate parts of the mountain. That means beginners have their own area, including a long run from near the top of the mountain. A mere 20 minutes from Cascade Mountain and half an hour from Wisconsin Dells, it’s also convenient to get to for most of the state’s population centers. One of the only resorts with ski-in/ski-out accommodation on our list, it’s a great destination on its own or could be part of a bigger trip!

Three mountains’ worth of skiing in a woodsy, lakeside setting

Tucked away in northern Wisconsin, Whitecap Mountains Resort is a long trip for many in the state (five hours from Milwaukee and four from Green Bay). But if you’re willing to make the trip, the resort—at the western end of the Lake Superior snow belt—often boasts the most snow in the state. Its 43 runs offer something for everyone and sprawl across three different peaks and 400 ac. The relative isolation means it’s rarely crowded and has a relaxed, deep woods vibe on the shores of Weber Lake. Sadly, the main lodge burned down in 2019, but the resort kept operating. There is still plenty of lodging and services available, with big plans for a new lodge in the works!

A great place to learn conveniently close to Milwaukee!

Alpine Valley is one of southeast Wisconsin’s most conveniently located ski areas. Less than an hour from Milwaukee, it’s also a short trip from Madison and Chicago’s northern suburbs. With only about 90 ac of skiable terrain, there’s not a lot of real estate, but high-speed lifts will help you get the most out of the mountain. There's also a dedicated beginner area and the resort offers a reduced-price ticket for its three chairs and four surface lifts, making it a great place to learn. Adult learners can even take Friday and Saturday evening lessons that include a drink ticket!

A lot of variety in a small package, nestled in the north woods

Perched in northern Wisconsin’s Blue Hills, Christie Mountain tucks 21 runs and four terrain parks into its 43 ac. While that isn’t a large number of trails, there’s a nice variety across ability levels so there’s something for everyone, including some winding runs through the woods as long as 4,000 ft -impressive for such a small resort! Not as far as Whitecap Mountains, it’s still a long drive from many parts of Wisconsin, but only a couple hours away from Minnesota’s Twin Cities. Amenities at the hill are limited to a charming chalet, but there are rental cabins and quaint motels in the nearby towns.