The 7 Best Ski Resorts in Michigan 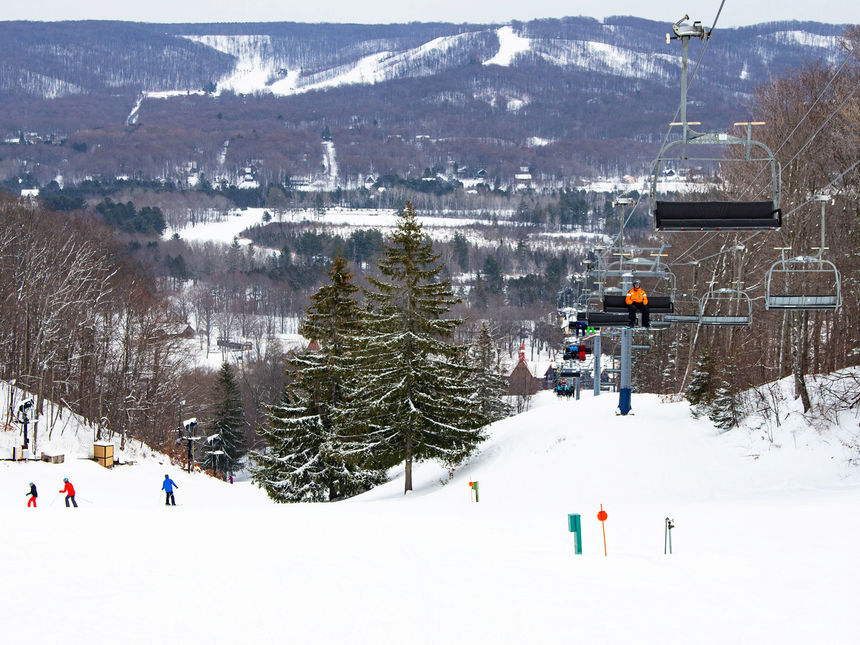 With roughly forty ski areas and plenty of snow, thanks to the combination of the Great Lakes and cold air from Canada, Michigan offers plenty of skiing and riding. No place in the state is more than two hours from a ski resort, and here are the best seven as chosen by the locals!

Due to COVID-19, safety measures were put in place by the State of Michigan which impacted the 20/21 ski season. These included limits on group gatherings and mask-wearing in public places. In Charlevoix County which is home to Boyne Mountain Resort, restaurants were required to operate at no more than 50% of normal capacity and to implement contact tracing. Most resorts including Boyne Highlands strongly recommended purchasing lift tickets, activities and lessons in advance. Such restrictions are not anticipated to continue into the 21/22 winter season.

One of the Midwest’s premier destination ski resorts

With 60 runs that cater to every ability level and plenty of snowmaking as well as Nordic skiing, snowshoeing, ziplining, nightlife, and the state’s largest indoor waterpark, Boyne Mountain is a destination resort with something for everyone. Guests staying at the resort lodging or are an equipment rental customer are eligible for a complimentary beginners area lift ticket, making it cheap and easy for beginners to get started in the sport. Near the northern end of Michigan’s Lower Peninsula, it’s about a four-hour drive from Detroit, but there are plenty of nearby lodging choices to make for a great weekend trip from the state’s southern region.

The largest resort in Michigan and the highest vertical terrain in the Lower Peninsula.

Just over 30 minutes north of Boyne Mountain and overlooking Lake Michigan’s Little Traverse Bay, sister resort Boyne Highlands offers a more low-key and relaxed vibe. That doesn’t mean it’s lacking where it counts, though: with 55 runs for every ability level and more than 550 ft of vertical, there’s plenty to keep you busy on the slopes, including the longest run in the state. Even if the après scene is quieter, there’s still plenty to do off the slopes, including cross-country and snowshoe trails, an ice rink, and tubing park. Nearby lodging choices range from condos and quaint cottages.

It’s not hard to see why Crystal Mountain earned a place on Parents Magazine’s 10 Best Winter Resorts for Families. Ski and snowboard lessons are available for little ones as young as 3, and kids under 6 ski for free.The mountain’s 58 runs (half of them lit for night skiing) cater to every skill level. There’s even plenty to do for family members who don’t ski or ride, including an award-winning spa. Three and a half hours northwest of Detroit, its location near the shores of Lake Michigan and a snowmaking system that covers almost the entire mountain make for reliable snow conditions so you can plan a weekend visit with confidence!

Unbeatable convenience in Southeast Michigan, just an hour from Detroit

With only 350 ft of vertical and 100 ac of terrain, and without the amenities of many of the other resorts on our list, it might be easy to overlook Mount Holly. But for skiers and snowboarders in Southeast Michigan without the time or budget for a bigger trip, it’s a convenient and affordable way to get in your winter turns! An hour northwest of Detroit and twenty minutes south of Flint, it’s a natural choice for a day trip, and with night skiing available, you could even get your turns in after work or school!

The best place in Michigan for expert and advanced skiers!

Mount Bohemia unapologetically caters to advanced and expert skiers; it was designed that way from the start. There are no ‘green circle’ slopes here, and no grooming – just loads of natural snow courtesy of Lake Superior. Bohemia offers 900 ft of vertical, and nearly all its runs are black diamond – some are even triple black! Its location on the Upper Peninsula might not be convenient for many. Still, extreme skiers and boarders who think they need to head to Colorado or Utah to get their powder and tree skiing fix should definitely give Mount Bohemia a shot!

Some of the best snow in the Midwest and ski seasons up to six months long!

Less than 1 mi from the Wisconsin state line in the western Upper Peninsula, Ski Brule is a long trip for most Michigan skiers and riders (it’s almost twice as far from Detroit as it is from St. Paul). But its location combined with its approach to snowmaking and precision grooming make for longer ski seasons than many resorts around the country (often lasting well into May!) and excellent conditions. With trails as long as 1 mi and wooded trails for advanced skiers, Ski Brule offers plenty for its modest lift ticket prices. It’s definitely worth a visit for any Midwest skier or rider!

Located mere minutes from Boyne Highlands, Nub’s Nob has won multiple nation-wide awards for its grooming and snowmaking operations, so you’ll find good conditions to match the resort’s friendly atmosphere. Kids aged 8 and younger ski free and there’s a free beginner’s area and lift, so it’s a great place to give the sport a try! More experienced and adventurous skiers and riders will find challenging bump runs and terrain parks that have earned the praises from NM3, Transworld Snowboarding, and Outside Magazines. Aside from some slope-side condos, amenities are somewhat limited, but with Boyne Highlands next door, you don’t have far to go for more dining options and creature comforts.